"And it came to pass after these things...

…that G-d did prove Abraham, and said unto him: ‘Abraham’; and he said: ‘Here am I.’ And He said: ‘Take now thy son, thine only son, whom thou lovest, even Isaac, and get thee into the land of Moriah; and offer him there for a burnt-offering upon one of the mountains which I will tell thee of.’ – Genesis 22:2

Moriah Congregation began as the vision of its founder, Rabbi Samuel Dresner z”l, who sought to establish a strong, vibrant community centered around the synagogue. His vision resonated with a small, but passionate group of people who worked tirelessly and selflessly to lay the foundation of the community that exists today.

It was under the leadership of Rabbi Samuel Fraint, who became Moriah’s rabbi in 1987, that the community began to realize its true potential. This was due in large part to Rabbi Fraint’s strong and bold leadership and his unwavering commitment to traditional Jewish life and practice. It was under Rabbi Fraint’s leadership that Shabbat services expanded to include traditional elements like a complete Torah reading and the repetition of the Amidah. During Rabbi Fraint’s tenure of nearly 30 years, Moriah grew from 80 families to more than 400 families and became known around the country as a truly unique synagogue community.

In 2016, Rabbi Ben Kramer succeeded Rabbi Fraint. Rabbi Kramer continues to uphold all that has made Moriah such a strong and vibrant community while seeking to bring his own passion for Torah and Mussar into the community and helping to guide it towards the future.

It’s 1976 and Jimmy Carter is President, the nation is celebrating its bicentennial, and a gallon of gas costs 59 cents. It’s also the year that a small group of men and women from different backgrounds gather in a private home on Sheridan Road to plan the launch of Moriah Congregation. Their ranks included the co-founders of an advertising firm, a lumber industry executive, and the owner of a construction company. Here then are the stories of the people who gave so much to make Moriah Congregation what it is today. 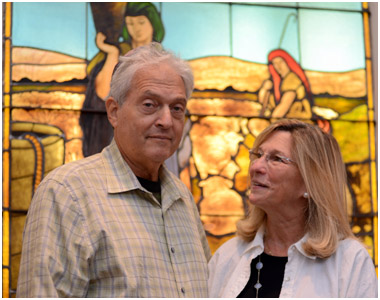 Throughout their 46-year marriage, Laurel and Arthur have shared a passion for Jewish art and design. In 1976, Laurel was an acclaimed Interior Designer and Arthur was Director of the Maurice Spertus Museum of Judaica and Vice President of Spertus College. Both applied their love for Jewish Art History to the task of creating a sanctuary that would uplift mind and spirit.

Arthur and Laurel played a pivotal role in securing the nine Tiffany-style stained glass windows in the sanctuary that depict classical biblical scenes. The windows were originally housed in Temple Emanuel until 1954, when the synagogue relocated to Sheridan Road and eventually became a Korean church.

As preparations for the future Moriah Congregation were being made, Arthur received a phone call from a real estate developer who was planning a new condominium complex on the grounds of the historic Temple Emanuel. The developer wanted to know if Arthur be interested in appraising the stained glass windows and seeing if there might be a suitable home for them.

Arthur accepted the opportunity and evaluated a number of potential homes including the Skirball Cultural Center in Los Angeles. “Thanks to Laurel saying ‘Let’s keep them for the future home of Moriah!’ we decided Moriah it is,” Arthur recalled with a smile.

The windows were painstakingly removed from the construction site. Another Moriah Founder, Ron Taub (z”l), underwrote and oversaw their entire restoration and storage while also negotiating the site for the synagogue, which was a former Deerfield District 109 public school.

After securing the Deerfield District 109 school building, Rabbi Dresner (z”l) asked Laurel to design a portable ark so that services could be held on what had been the school’s basketball court (now the Thaler Social Hall). Rabbi Dresner also requested the Torah mantles be designed in the Sephardic tradition.

The portable ark and Torahs were eventually reinstalled as the permanent ark in Moriah’s small sanctuary, or Beit Midrash. Laurel explained that the fabric used for the ark doors and Torah mantles came from the renowned Jack Lenor Larsen Textiles, a world famous textile designer. While the fabric is no longer made, it can be found in museums throughout the world, including the Musée des Arts Décoratifs (Paris), the Victoria and Albert Museum (London), and The Museum of Modern Art (New York). Laurel said she selected this fabric because of the rich, royal colors and the use of gold and silver metallic threads.The Torah mantles were specifically designed in the French, Spanish, and Italian traditional style—gathered like robes at the top.

Later, Laurel was asked to do the interior design for the new sanctuary, which is our sanctuary today, as well as the small sanctuary, the social hall, and the Simcha Wall. 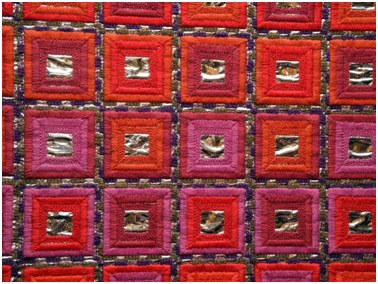 The Elements of Laurel’s Design

Most of the elements of Laurel’s original design can be seen in Moriah Congregation today.